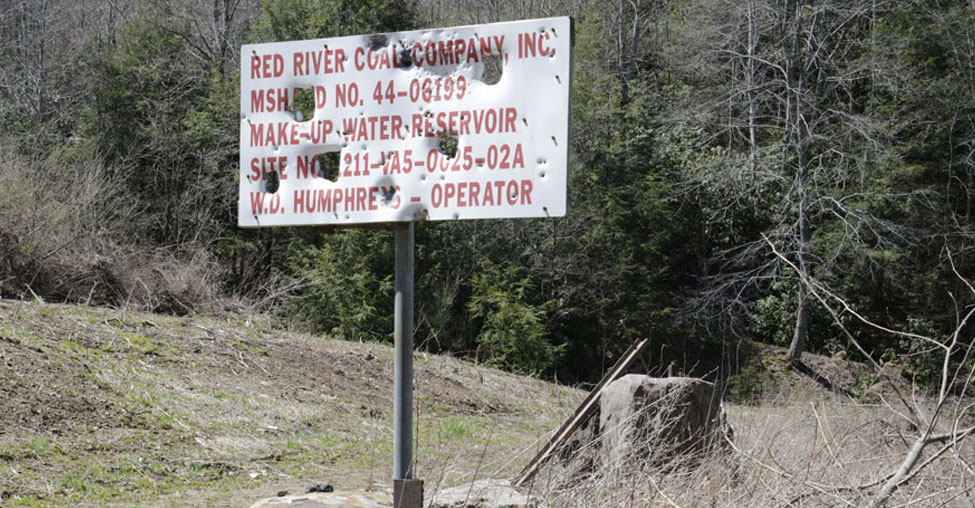 by Emma Eisenberg *This story was originally featured in YES! Magazine in July, 2017

Across central Appalachia, once-thriving mining communities have been ravaged by the collapse of the coal industry and the flight of jobs from the region. For a region that remains rich in natural resources, Appalachia’s local governments continue to struggle to fund basic services such as housing, education and roads.

One significant factor in the region’s decline is the land. Since the coal industry began its decline, and even beforehand, millions of acres have essentially been removed from the region’s economic production and tax rolls, and nothing has replaced them.

“Land is the most important thing to us, yet it’s not clear at all who owns it,” says Karen Rignall, assistant professor of community and leadership development at the University of Kentucky. “Without broad-scale knowledge of the patterns of land ownership this region cannot work together to move forward. But who owns it on paper is not always who owns it in actuality. That takes time and money to find out.”

The coal industry of central Appalachia has been on the decline for more than 30 years, with West Virginia and Kentucky losing more than 38,000 coal jobs in that time. As coal companies pulled out, they took with them the dollars that small towns used to use to fund their schools and infrastructure, and left behind abandoned mines, polluted rivers and vast swaths of vacant land.

All over Appalachia, communities and organizations are working around the clock to come up with a way to “justly transition” the Appalachian economy to whatever comes next.

Rignall and postdoctoral researcher Lindsay Shade are collaborating with a growing group of citizens that think a part of the answer to a post-coal economy may lie with an old land ownership study—and have been inspired by it to do a new one.

In 1978, a group of citizens from the central Appalachians came together in frustration over what they felt were unjust practices of land ownership and distribution. Strip mining operations used mineral rights to displace people from their homes, and local business were unable to develop the land because it was owned by corporations based in other states. But in those discussions one common theme emerged: not knowing who owned what land and why was a major obstacle when it came to creating a stronger and more diverse Appalachian economy.

“Land is a means for distributing and exercising power,” Gene Wunderlich, an economist with the U.S. Department of Agriculture’s Economic Research Service, said at the time.

But finding good information about local land ownership was much harder than it seemed. Details about who held title to a piece of land often was obscured by opaque or incomplete record-keeping.

In many cases, coal companies may deliberately obscure their names and records.According to the Lexington Herald-Leader, the records in Knott County, Kentucky, are so complicated that the county has no system to find out the truth; they simply must accept coal companies’ tallies of their holdings and debt.

Without better data about land ownership, the coalition formed in the late 1970s realized it would never be able to argue for the kinds of deep changes necessary when it came to resources and power in Appalachia.

Researchers at the Appalachian State University in Boone, North Carolina, and the Highlander Research and Education Center in New Market, Tennessee, assembled a team of more than 60 volunteers to study the land ownership patterns of 80 mountain counties in West Virginia, Virginia, Kentucky, Tennessee, North Carolina, and Alabama. The investigators were activists, researchers, scholars, and citizens who received training in how to examine county property tax records to determine land ownership, the location and value of property owned, and property tax amounts. The Appalachian Regional Commission funded the publication of the results of the survey in 1981.

The report, “Land Ownership Patterns and Their Impacts on Appalachian Communities,” found “ownership of land and minerals to be highly concentrated among a few absentee and corporate owners, resulting in little land actually being available or accessible to local people.”

The report found that nearly 75 percent of the surface acres surveyed were owned by entities based outside the Appalachian region; 80 percent of the mineral rights also had out-of-state owners. Though the value of both the land and the minerals below it had increased rapidly over the years, local governments had not experienced a corresponding increase in property tax money—more than 75 percent of mineral rights owners in the region still pay less than 25 cents per acre in property tax, thanks to large tax breaks or lower rate structures that absentee corporate owners are able to take advantage of.

Without those cuts, landowners would likely pay taxes more in line with the land’s actual assessed value—at least 75 cents per acre, which is comparable to what local people paid. As a result, local communities were disadvantaged by “the failure of the property tax system to tax the region’s wealth adequately and equitably,” the report said.

In terms of concrete effects, the old study was used for grassroots political action all six participating states. It led to the formation of the Kentucky Fair Tax Coalition (now Kentuckians for the Commonwealth), which eliminated a law that had previously allowed coal companies to strip-mine over the objections of locals who owned the surface right to the land. The Western North Carolina Alliance pushed for passage of the Mountain Resources Planning Act, a state law that required coordination between energy projects and environmental protections. (The law, passed with broad bipartisan support in 2009, was repealed in 2013 after Republicans won control of both houses of the state General Assembly.) In West Virginia, the study was used as evidence in court, leading to a judge finding that rural counties were unconstitutionally discriminated against because of the tax system that was used to fund local schools.

However, the study failed to inspire the systemic changes many were hoping for, possibly because the coal industry was still a major economic force in many rural communities. That’s no longer the case.

“This is a moment when everybody understands the necessity for thinking about political and economic issues in really different ways,” Rignall says. “Tax structures always favored coal companies and other forms of extraction. But now the big power brokers are losing some of their power. People are coming to the table who wouldn’t normally be willing.”

The Appalachian Citizen’s Law Center recently found it will cost more than $9.6 billion to reclaim the 6.2 million acres of lands and waters of abandoned and polluted mine sites.

President Obama also pushed hard to create the Reclaim Act and the Power Initiative, two federal programs designed to reinvest money into coal communities and fund the reclamation of abandoned mine sites.

But, as many communities are finding, even if they have money for redevelopment, getting control of the land is another challenge. Once again, communities and activists have been coming up against the barriers of multilayered leases and rights structures.

Building on the Past

Rignall and Shade found popular support for another land study. West Virginia did one of its own in 2012 and 2013, and the idea began to spread to other Appalachian activist communities. In September 2016, Rignall and Shade and other scholars convened a preliminary gathering of about 60 people at the University of Kentucky to decide on whether to do a new land study, and if so, what the group hoped it would accomplish.

They found overwhelming interest in working together to find answers about land ownership across Appalachia. People from old community organizers to undergraduate college students invested in their futures showed up to create an intergenerational movement.

Rignall and Shade hope to mobilize citizens across Appalachia to become volunteer researchers to find out who owns the land in their communities, just as the previous group did. The group is seeking financial support from many sources including grants and funding to pay the researchers for their time, but as of right now, it’s being conducted do-it-yourself-style on a very small budget.

“The long term big vision is reclaiming control over the land in a way that benefits local Appalachian people directly,” Shade says.

The new land study is in its early phases of development. Rignall and Shade want to make sure it is a collaborative and grassroots project that responds to the needs of diverse local communities.

One challenge is that different communities need different strategies to get the most out of their land resources. In southwest Virginia, for example, the biggest problem is how counties can get more tax money.

“Real estate taxes are based on fair market value, determined by comparable sales within the last five years,” David Rouse writes in an email.

Rouse, a professor at the University of Virginia’s College at Wise who has been volunteering on the land study project, said that when company-owned land is transferred to another division or sold as part of a corporate merger, those parcels tend to be appraised at lower values than those sold through conventional real estate transactions.

“With the loss of coal severance tax, this has caused a serious strain on county revenues affecting both school budgets and infrastructure,” he says.

In Pike County, Kentucky for example, the local government has pushed for more adequate assessments and enforcement of delinquent taxes as a tool to get absentee owners to sell the land back to the county. That process depends on the cooperation of local officials who might not adequately enforce tax collection for a variety of political reasons, Shade says.

“You have this amount of time to sell or we’re going to tax the hell out of you,” she summarizes. “They got a lot of land for development that way.” But for this to work for any given county depends on the support of the local government. Other communities are turning instead to forming land trusts to reacquire the land: In northeastern Tennessee, the Clearfork Community Institute and Woodland Community Land Trust have acquired 450 acres of former mine property since 1997.

Rignall and Shade see this diversity of potential approaches as an asset.

“Everyone who’s involved is doing something different, which is fantastic,” Shade says. “We hope it continues to evolve in an organic fashion. We want this to help transform power dynamics broadly across the region, so our approach has to be varied and dynamic.”

Terran Young, an Appalachian Transition Fellow hired through the Highlander Center to work on the new land study, also has been reaching out to the community in southwestern Virginia to evaluate their concerns and needs. She hopes to attract more people interested in contributing to a renewed land study.

“The community is very willing to listen to the presentations but now we are at the point where we want to get real community involvement,” Young says. “We hope to gather a group of community researchers and get them trained in the methodology that can not only help with the land study but also be a skill they can have for life.”

The land study leaders also are trying to balance are the needs of local people and the larger-scale issues affecting the region as a whole.

“This really isn’t about an academic study,” Rignall says. “This is about a grassroots effort to reimagine a movement and about who gets the power, and it will develop organically and messily. This movement has an energy that’s really different from anything I’ve ever been a part of.”

She hopes that the process of conducting the new study will be just as transformative as the results.

This work is licensed under a Creative Commons Attribution-NonCommercial 4.0 International License.